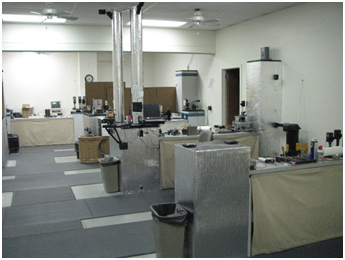 I recently received a question from one of my distributors regarding the stability spec of our bore alignment lasers. The distributor said that their customer complained that the angular stability we specified for the L-708 is too high to make the laser useable at 30 meters. So I had to set him straight on just what is truly important for laser stability, and how the instability of the laser itself is miniscule compared to the problems that arise from what it is attached to! Here is the gist of what I said:

This is an excerpt from our L-708 Bore Alignment Laser brochure, showing the 2 factors for laser beam stability (drift): the first number is the translational (center) factor and the second is the angular factor.

The Mounting Surface is Most Important for Laser Stability!

The key to both of these factors is temperature change for the laser only and it does not take into account what is happening to the surface that the laser is attached to, which is by far the most important aspect of laser beam stability.

So as you can see, the surface the laser is attached to is MUCH more important for laser drift than the amount of drift due to the laser itself.

Reference Targets are a Must for Long-Distance Apps

This is why our Bore9 Software includes the capability to read two targets (one reference and one measuring) at the same time. We also added wireless communication to our R-1307 Readouts, so our customers, who prefer not to use software, can transfer data from one R-1307 readout to another, giving them the ability to monitor the reference target with the R-1307 readout connected to the measuring target.

OK, so the moral of this story is if the laser is drifting or has excess noise, then don’t blame the laser!! Instead check what surface the laser is mounted to because 9 times out of 10, it is the mounting surface that is causing the problem. Is the surface stable? Is it rigid? Is there a source of heat or cooling that is causing thermal growth of the surface? Is there vibration?

One tiny thing that hardly anyone thinks about but can cause a lot of laser drift is dirt! If you don’t properly clean the laser mounting surface, even the strongest magnets can’t control drift if the thermal growth causes the surface to grow and thus the dirt to move.

500 KG Block Not Stable Enough because of Dirt?

Here’s an illustration: I was in Taiwan doing a demo on a gantry-style machine tool. I did not have an instrument stand so they arranged for me to have 500 kg block of steel to set on the floor to hold the laser. This was a setup where I had to check the parallelism of one rail to another, so I had to use our laser-transfer method to check, which meant I had to move the block to several different places.

Well they wanted to test me, so they had me move from one rail to the other several times to check repeatability, which required moving the block several times. The problem was it was just not repeating or matching their mechanical readings very well. I was pulling my hair out (no easy task if you know me!) trying to figure out why.

Then, as I was thinking, I happened to put my foot on the block and noticed the laser beam moved – a lot. When I took my foot off, it did not move back (if the mount was stable it would have moved back). AHH! There is the culprit. I got thinking about it and it occurred to me that even though it is a very heavy weight the block was not very flat nor was the floor very clean, so this meant the block was rocking and drifting, probably on dirt. It was not a lot but enough to mess up my laser setup.

The “field fix” was to put 3 washers under the block as feet to create a kinematic mount and then my problems went away. The only problem was so did the customer! I hate when I blow a demo! Lesson learned!

Another big misconception about stable surfaces is concrete. Yup that really hard stuff you walk on is as spongy as rubber when you put a laser on it, project the beam many meters away and try to achieve high accuracy. Don’t be surprised if you discover this while aligning a machine tool because a lot of companies try to save money on machine tool foundations and put too little concrete under their machines. So if the concrete is only 4 or 5 inches thick, your weight will bend it quite easily!

If you don’t believe me, try standing next to a laser on a concrete floor with a target at 10 meters in your typical office building with a standard concrete floor. Then walk away from the laser and see how much the beam moves on the targets. You will be surprised by what you see!

We discovered problem the hard way in our laser-plane-setting range room, where we have concrete pillars on a concrete floor for setting the flatness of our laser planes. We were having a lot of problems with the calibrations and thought we had a problem with the lasers. However, we found out that it was the weight of our techs that caused floor to bend and the laser plane to move during the measuring process. It was amazing how repeatable it was when they moved away and moved back! Now the techs all have to stand in the same spot when adjusting the laser planes into spec. It also means they have to stop eating dessert!

As Martin Hamar has said many times, “The world is a spongy place at .0001 inches.”